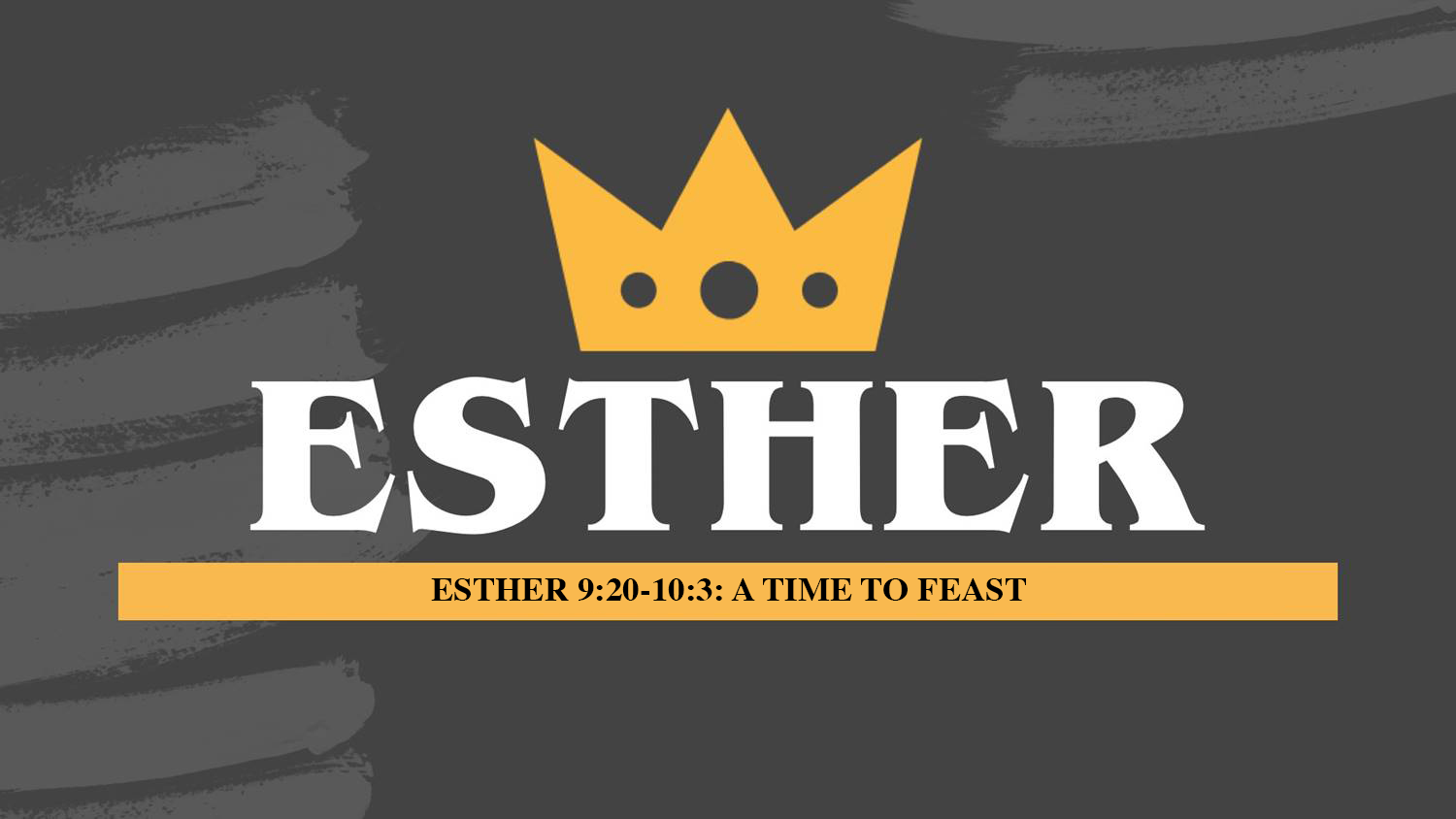 Posted at 13:55h in Sermons by Pastor Dan

Now the Jews have complete victory throughout the empire in just two days.  It is clearly time to celebrate.  Everyone is invited.  It’s a celebration to celebrate good times.  All are welcome.

This occasion for feasting brings the book of Esther full circle.  The story began with six months of feasting in Susa, continued with seven days of feasting throughout the empire, and now ends with two days of feasting—just for Jews and for those who have attached themselves to the Jews.

Mordecai takes a bold and unprecedented step (Fox):  inaugurating a Jewish festival himself.  A key word repeated in verses 21, 27, and twice in verse 31 is obliging or obligated, meaning to be irrevocably bound by.  Mordecai’s letter and power obligates the people, but in verse 27, the Jews firmly obligated themselves and their offspring, as well as all who joined them.  Then in verse 31 Esther’s letter obligates the Jews, and they once again obligated or irrevocably bound themselves.

We see deep irony here when one recalls the letter in Esther 1:22 that went out from the leadership insisting that wives be kept in their place, “…that every man be master in his own household…”  Good luck with that!  However, now it is the king’s wife who issues a binding decree.  In so doing she also further publicizes her Jewish identity.  The young woman who in chapter two was torn between two identities is definitely Queen Esther of Persia, but now known by all as a Jew.

The Feast of Purim is far reaching in that the letter obligating them goes to all the Jews near and far in all the provinces of the king, which we know to be from Ethiopia to India.  Not only is it far reaching, but it is also long lasting—verses 27b and 28 say, “…they would keep these two days according to what was written and at the time appointed every year that these days should be remembered and kept through out every generation, in every clan, province, and city, and that these days of Purim should never fall into disuse among the Jews, nor should the commemoration of these days cease among their descendants.”

Purim celebrates the Great Reversal detailed in the book of Esther and summarized in verse 22 “as the days on which the Jews got relief from their enemies, and as the month that had been turned for them from sorrow into gladness and from mourning into a holiday; that they should make them days of feasting and gladness, days for sending gifts of good to one another and gifts to the poor.”  They were commemorating two things:  Haman’s plot on the one hand the the king’s intervention and rescue on the other.

The key word Pur or Purim is significant, being repeated seven times in verses 24, 26, 28, 29, 31, and 32.  What a strange choice of names!  Pur refers to the casting of lots or even fate.  Gregory asks us, “Why would anyone name a festival after the instrument their enemy used to set the date for their slaughter?”  Purim shouts out CHANCE!   For example, Esther 3:7 tells that Haman, the awful, frightful arch-enemy of the Jews, has figured out what their fate will be, and then the diviners determined by lots cast the actual day the Jews will be destroyed.  God’s law given by Moses made divination punishable by death because it was diametrically opposed to YHWH.  Divination is human chance and even worse, demonic.

Is this a case of “Esther is the Reason for the Season” or that Santa Claus elbows Jesus out of the way and storms the Christmas castle?  Or the Easter bunny is bigger than the risen Lord Jesus Christ?  Are the Jews celebrating human chance?  Or is there something deeper to Purim?  Proverbs 16:33 says, “The lot is cast into the lap, but its every decision is from the Lord.”  As we have seen, the unmentioned God has his fingerprints all over the “chance, coincidental” events of Esther.  Therefore, the Jews were to feast with an eye to God’s invisible and yet powerful hand.

Some of these verses are not without puzzles.  Verse 24 makes perfect sense when Haman cast lots in order to harry and confound the Jews.  He succeeded in that purpose because chapter 3 verse 15 tells us, “the city of Susa was thrown into confusion.”  There is a catchy word play in 9:24 because Purim sounds an awful lot like Haman.  However, verse 25 is a real head scratcher.  The king is presented in such a positive light that we wonder if Mordecai is writing about our Ahasuerus?  Or does Mordecai perhaps have another, a greater, king in mind, the True King of Heaven (verses 24-25).  According to Proverbs 21:1, “The king’s heart is in the hand of the Lord, like rivers of water; He turns it wherever he wishes.”  The King of Heaven is the true king.

You see Purim does not should out that the lives of God’s people are left up to chance.  Our destinies are not determined by the Hamans of the world or by Haman’s diviners or even to King Ahasuerus.  Gregory says, “It is God and God alone who determined the lot (fate, destiny) of his people in Persia in 485 BC, and it is God who continues to determine the lot of his people in every generation!”

These Jews did not forget the poor (Esther 9:22).  In Deuteronomy 16:11-12 God’s law tells the Jews, “And you shall rejoice before the Lord your God, you and your son and your daughter, your male servant and your female servant, the Levite who is within your towns, the sojourner, the fatherless, and the widow who are among you, at the place that the Lord your God will choose to make his name dwell there.  You shall remember that you were a slave in Egypt; and you shall be careful to observe these statutes.”  Purim is a Christmas-like celebration.  The Jews have been rescued, and as always, they are to give a thought to the poor.  Though their enemies had threatened to take everything from them, plundering their lives and their goods, the people of God have more than enough and to spare to actually give gifts to one another and to take care of the needs of the poor.

The Rise of Mordecai

TAX!  This ought to jump out at the careful reader, a sad reversal of tax relief referred to in Esther 2:18.  In spite of all the positive changes, in all the reversals for the better, out king here is the same old dude.  Duguid says, “His own personal interests remained paramount, no matter what the cost to his loyal subjects.”  Not surprisingly, Xerxes I failed in costly military endeavors in Greece, started a lavish construction program in Persepolis at great expense to his subjects, built a new palace and began work on the monumental Hall of a Hundred Columns.  However, he was assassinated by his courtiers in 465 BC, just over twenty years into his reign.  He seems to have remained untouched by events of Esther and by his Jewish queen.  He dies the death of the wicked twelve years after Haman’s death.  Sadly, some human beings remain untouched even with these close encounters with the Living God.

Psalm 1 says, “The wicked are like the chaff which the wind drives away” –Haman and Xerxes I.  “It is appointed to man once to die but after this comes judgment” Hebrews 9:23 tells us.  On the other hand, Psalm 1 also says that the man who delights in the law of the Lord is like a tree planted by streams of waters—Mordecai.

Esther in Review:  Reversal, Change and the Invisible God